Alice Coltrane adopted the sanskit name Turiyasangitananda in the late 70s after seeking spiritual guidance from guru Swami Satchidananda and later from Sathya Sai Baba. She was born in Detroit in a musical family and after moving in Paris and studying classical music and Jazz with Bud Powell she started working professionally as a pianist.

She moved back to the US when her marriage with Kenny “Pancho” Hagood ended and keep professionally playing piano. She met John Coltrane in 1963, married him in 1965 and in 1966 she replaced McCoy Tyner as pianist in John’s group.

Although John Coltrane’s A Love Supreme displays the spiritual direction she will embrace, her involvement with spirituality and specifically Indian spirituality manifested fully after John’s death in 1967.

She moved to California where she established the Vedantic Center in 1975. She composed the first cassette in 1982 and in the following years she would produce 3 more, although they were not distributed other than to the members of the ashram. She published a comeback album in 2004 and performed in public, the first time in 25 years, in 2006.

She died the following year of respiratory failure.

She was an immensely talented artist, a piano virtuoso, organist and, unique in jazz, an harpist. The fusion between Detroit gospel, bebop, traditional Hindi hymns, and classical Indian music is, I believe, the most significant contribution of Alice Coltrane to modern music. 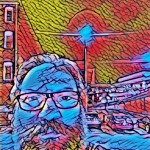